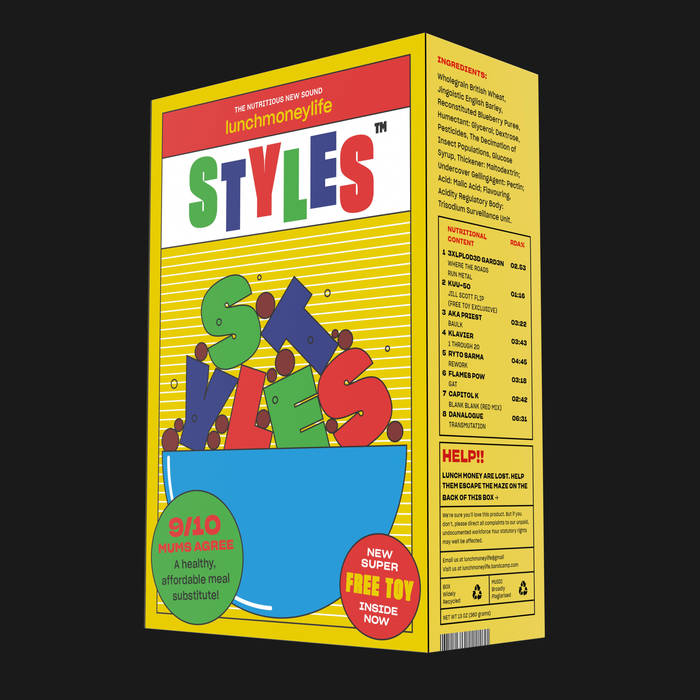 Lunch Money Life are a ‘jazz band’ with a mutated electronic twist. Their promo sheet says they’ve been playing backrooms of Polish Delhi’s and sketchy clubs across London and that their warped jazz takes cues from Don Cherry and Aphex Twin.
The mighty Equiknoxx (the Leftfield Jamaican dancehall duo) remixed their first single Living3000 – the group known as Lunch Money previously – morphing it into a new sonic place and sounding like a meeting of future bass and droid jazz. This single is also full of dread, Unlimited Ice Cream Palace is out now on Kaya Kaya (home to Jockstrap, Man Duo and Tomaga). The accompanying video to the single is made up of projected images across the skyscrapers and financial district of London.
Expect big things from this creative group. They have given out music in cereal boxes before (see their Bandcamp page). When discussing the process for their video, the band say: “The first night of filming took place in the Church – the band’s regular rehearsal space, now lit deep blue as they played the single over and over, a giant camera rig rolling back and forth on a dolly track. Later, we filmed close-up videos of the band members rotating and contorting their heads. We printed off every other frame, cut out the heads, and reanimated them using stop-motion techniques.

”Over the course of several nights, we rigged up a projector in a trusty 2001Toyota using 3 metre jump cables hooked up to the car battery, snaking out from the open bonnet, in through the passenger window, and connected to an inverter on the backseat. Driving round London in this rickety cyborg whip, we projected the newly animated heads on buildings large and small, from terrace houses to the Bank of England. The resulting shots are intercut with a lot of snorricam footage – a DIY chest rig, not dissimilar to a hands-free selfie stick, strapped onto each band member as they fled apparitions of their own faces.”