Carlos Niño and Miguel Atwood-Ferguson will release new album Chicago Waves on June 26th, for the near-peerless label International Anthem Recording Company, with debut single Part V1 – Into Eternity sounding like a modern classic from the cosmos of Iasos, the celestial Laraaji, or the cream of Japanese environmental music.

This New Age collaboration, born from work with Makaya McCraven – a live set before the band’s show – has resulted in another pivotal moment in music when the album drops this month. It further cements the seminal catalogue that is rapidly being produced by International Anthem – the cross polination, cultural resonance and sheer visionary talent of those involved has created a soundtrack for our time. On this occasion the output is at the more ‘ambient’ end of the catalogue, other artists do ‘jazz’, but when reflecting on the masterpieces found on this Chicago-based label, mere genrefication seems incidental because of their trancendental output and creative vitality of the music.

Carlos Niño & Miguel Atwood-Ferguson are life-long Los Angelenos and long-time collaborators. They became friends 15 years ago and have worked on a number of projects – Voices as beat duo, Ammoncontact; Living Room by The Life Force Trio, comprised of Niño, Dwight Trible and Dexter Story; as well as Niño’s jazz band Build An Ark.

“Miguel Atwood-Ferguson is among my dearest, closest friends, and collaborators. He is family,” says Niño. “I enjoy every opportunity that we find or create, or invitation that we agree to accept, to communicate with each other psychically.” Atwood-Ferguson says: “Carlos has been one of my greatest friends and teachers ever since 2005. I am joyously eternally indebted to him and can’t wait to do as much with him as possible!”

The pair flew to Chicago to participate in the album release performance of Makaya McCraven’s Universal Beings after they were part of recording the ‘Los Angeles Side’ of the album at label mate Jeff Parker’s house in Altadena, California. The Universal Beings performance and preceding days of rehearsal took place at the iconic South Shore Cultural Center – “a historic gilded-era urban club-turned-public facility” deep on Chicago’s Southside and right along the reedy shore of Lake Michigan. Before the show at Co-Prosperity Sphere, the pair were asked to perform and their 44-minute improvised set was spontaneously dubbed Chicago Waves.

“The previous days spent in South Shore (and the many commutes to-and-from, along Lake Shore Drive) had imprinted the deep blue vastness of early-winter Lake Michigan into Carlos and Miguel’s respective and collective consciousness, and thus, into the spirit of the luminous music they created that night at Co-Prosperity Sphere,” the label says. “We at IARC are happy to share this recording of Chicago Waves with the world in a time when peace-bringing sound and a sweet memory of live music, sparkling inside the collective breath of community in communal space, has potential to provide the utmost nourishment.” 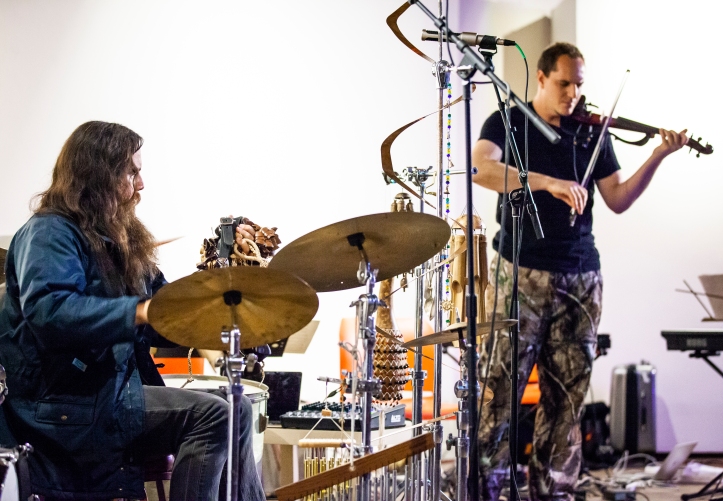 Miguel Atwood-Ferguson is an arranger, composer, music director, producer, and multi-instrumentalist who rose as a classically trained session musician. He has composed string arrangements for everyone from Dr. Dre to Anderson .Paak, Thundercat and Flying Lotus (among many, many others).

Niño and Atwood-Ferguson reunited in 2007 to record their debut album for Alpha Pup, a stirring and reflective duet entitled Fill the Heart-Shaped Cup. They would go on to play together often over the following decade, but it’s not until now that they reunite again on Chicago Waves, out on June 26th.

More at the IARC Bandcamp.