The first single taken from the forthcoming On The Corner compilation, Door To The Cosmos, comes from new OtC label recruit Guedra Guedra – a producer and musician who is breaking the mould. His eclectic influences and fusion of traditional sounds from around the world inspire his psychedelic and intense productions. Guedra Guedra is innovating the global bass scene – alongside label mates Dengue Dengue Dengue – and Cousouse Curtain, featuring fellow Moroccan Taxi Gabir, continues that evolution of sound design.

The forthcoming Door to the Cosmos compilation is the tenth full release, alongside an array of 20 EPs, for London’s On The Corner Records. Door to the Cosmos traverses influences from Detroit, UK bass culture, New Orleans or the Niger delta. 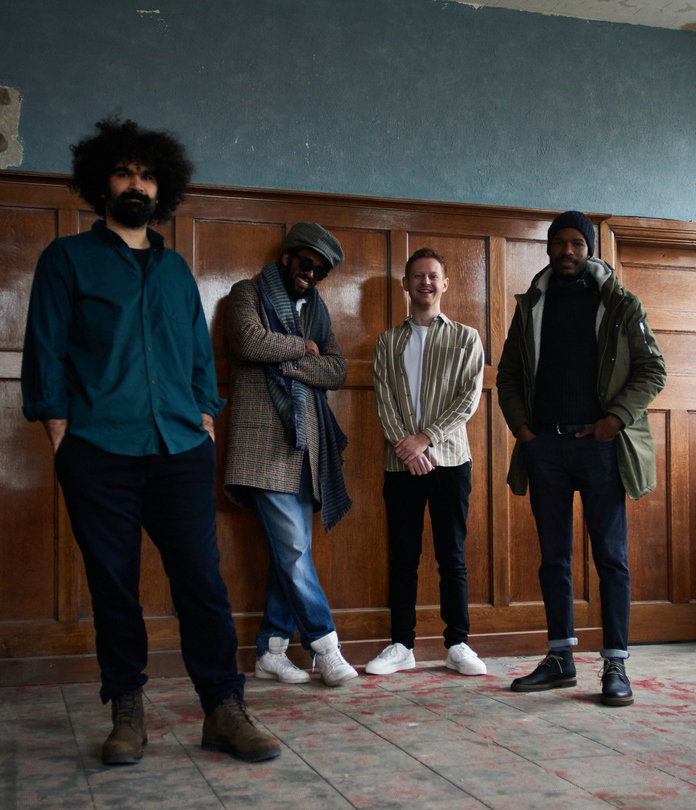 Flameback Dance by London based quartet Ariwo (above), featuring Cuban and Iranian members, is the second single to be released from the forthcoming compilation.

“The compilation is the first outing for a new raft of artists who are celebrated by the label and welcomed to a creative space brimming with the tales of unsung pioneers of the past and champion sonic explorers of the future,” according to the label.

“Prolific underground-house producer from Denmark, Uffe joins the rising star of dub-inflected electronica from the Tunisian Sahara, Azu Tiwaline; Glasgow DJ and tastemaker, Rebecca Vasmant is bringing her love of deep jazz to her house and soul productions.

“The cosmopolitan influences embodied by Sunken Cages, whose Indian percussions and Siddhi culture, informs the New York/UK bass music being conjured; Edrix Puzzle is a new UK jazz trio pushing jazz beyond Earthly constraints and into plateaus of imagined Mwandishi landscapes. Clive From Accounts bangs numbers and drum machines equally hard; Batida is a party-pro renowned for bringing kuduro to European good times; Ariwo are referencing their Cuban-Iranian roots, exploring ancient rhythms with drum machines and modular synths; L.A. legend, Jose Marquez makes the house deep and ancestral. Petwo Evans are seeking the ecstatic in future dance with an eye on afro centric rhythms brought to life in the Welsh valleys. These are just the Door to the Cosmos artists making their label entrance, and for a handful of artists this is their debut release.”

To preorder on the On The Corner Bandcamp, click here. You get two the tracks featured above in advance, digitally.