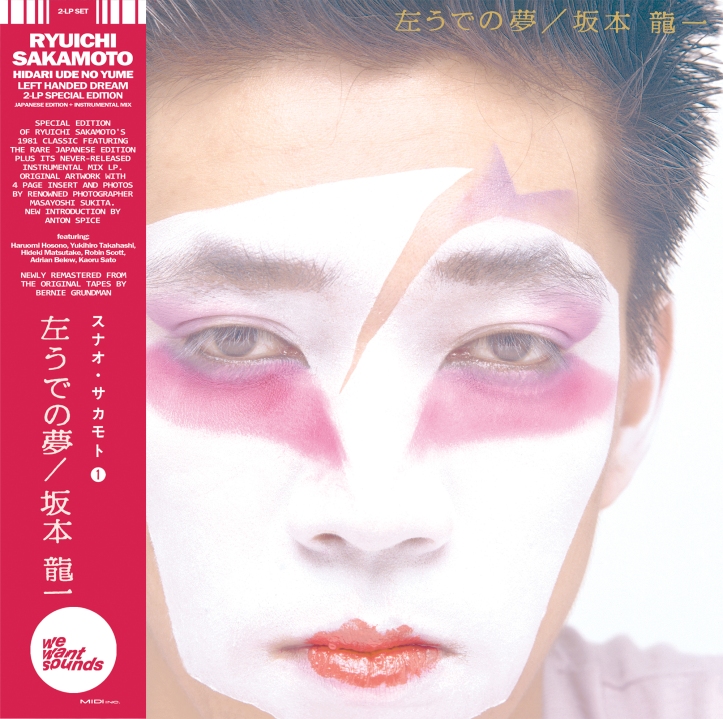 This is a fantastic record that was made at a pivotal time for Ryuichi Sakamoto – it displays a wealth of global influences as shown by the diversity of instruments featured on the credits: marimba, didgeridu, traditional Japanese instruments such as the sho and hichiriki flutes – the very year Sakamoto was invited by Haruomi Hosono to join Yellow Magic Orchestra, alongside Yukihiro Takahashi.

This new reissue features the original versions of the tracks that made it onto the final album in 1981 (the ones that were changed for a European market). New mixes feature the YMO members. It’s more widely known as the Left Handed Dream album. Wewantsounds are on a real role at the moment – recent releases Ammar El Sherei’s Oriental Music and Billy Brooks’ Windows of the Mind are well worth checking out.

​In 1981, the musician decided to record an album rooted in pop, following B-2 Unit, which had a more of an experimental edge and his landmark electro debut Thousand Knives Of from 1978. For this new album Hidari Ude No Yume, Sakamoto invited British producer Robin Scott – who had had huge hit with Pop Muzik – to co-produce.

They entered the Alfa studio in July 1981, accompanied by a handful of musicians. The album was released in Japan in 1981 and Epic Records picked it up for Europe a year later but decided to release it in a significantly altered version. The sequencing was completely reshuffled and two tracks, Saru No Ie and Living In The Dark were completely dropped while three others, Relâché, Tell ’em To Me, Venezia were heavily remodelled with English lyrics and became Just About Enough, Once In A Lifetime and The Left Bank. Last but not least, a new English-sung track, The Arrangement, was added, making the album nine tracks instead of ten for the Japanese edition. These included his fellow YMO musicians Haruomi Hosono and Yukihiro Takahashi. Altogether this International version called Left-Handed Dream was a very different album from the Japanese one and although both were successful at the time and further established Ryuichi Sakamoto as a global solo artist, the Japanese edition of Hidari Ude No Yume remains largely unknown to international ears.

The label adds: “Wewantsounds is proud to announce the reissue of Ryuichi Sakamoto’s third solo album Hidari Ude No Yume (Left Handed Dream), originally released in 1981 on the Alfa label. Save for a small-scale Dutch vinyl release in 1981, it is the first time the album’s original Japanese edition is released outside of Japan (the European release on Epic Records included significantly different tracks and mixes).”

The recordings have been newly remastered from the original tapes by renowned engineer Bernie Grundman, this LP edition comes with original artwork featuring a striking cover shot by famous photographer Masayoshi Sukita (sourced from the original negative), OBI strip and 4-page insert with new introduction by journalist Anton Spice. The album will also be released as a 2-LP limited edition gatefold including the album’s full instrumental mix.