Label favourites Hive Mind Records have put together a fantastic compilation in aid of a bunch of charities – get The Uncanny Times and donate to a range of worthy causes (here on the label’s Bandcamp).

Label boss Marc Teare (thanks Marc for all the background – Ed.) explains: “The Uncanny Times started as a response to the unfolding Corona Virus crisis. Seeing so many people around the world losing jobs over recent weeks, and generally being placed in extremely precarious financial situations, has been difficult and we thought it would be good to give some new music to the world and make it available to anyone regardless of their ability to pay.

“We ask that you pay nothing for the download of this album, however, if you are able to give something, the artists have contributed a list of charities who are doing good work in their areas through this crisis, so we suggest you give what you might have paid for this download directly to one of the charities.”

The list of charities follows the artist information of those involved; there’s exclusive material from artists previously released on Hive Mind, as well as newcomers to the label.

“Born in 1951 in Essaouira, Mahmoud Gania came from one of the great Gnawa families. A respected singer and guimbri player, he was one of the most prolific recording musicians in Morocco. From the 1970s, until his death in 2015, he released many albums for a variety of Moroccan labels as well as recording with artists as diverse as Pharoah Sanders, Peter Brotzmann, James Holden and Floating Points. The track on this compilation is from the album Aicha which was recorded in Essaouira in the late ’90s and has never received a release outside of Morocco. We are incredibly proud to be reissuing the album later this year.”
maalemmahmoudgania.bandcamp.com

“Nicolas Gaunin is the alter ego of Nicola Sanguin, part of the vibrant experimental music scene around Padua, Italy, where he plays in outsider rock groups – The Lay Llamas and Orange Car Crash. Nicolas Gaunin is his solo electronic project, a playful cosmic mash-up that uses the rhythms of traditional African percussion groups and skews them slightly to create unsettling, off-kilter grooves. His album, Noa Noa Noa is available through Hive Mind Records.”
www.nicolasanguin.it

“Moulay Ahmed El Hassani is a Moroccan artist born in a village in the Atlas Mountains. His love of music grew from a very early age. Over the past 30 years he has been writing, playing and recording his own music and developing his own unique style of modern Moroccan folk music. To date he has released over 50 albums in Morocco. After the success of our compilation album, Atlas Electric, we hope to bring new music from Moulay Ahmed to you in the not too distant future.”
moulayahmedelhassani.bandcamp.com 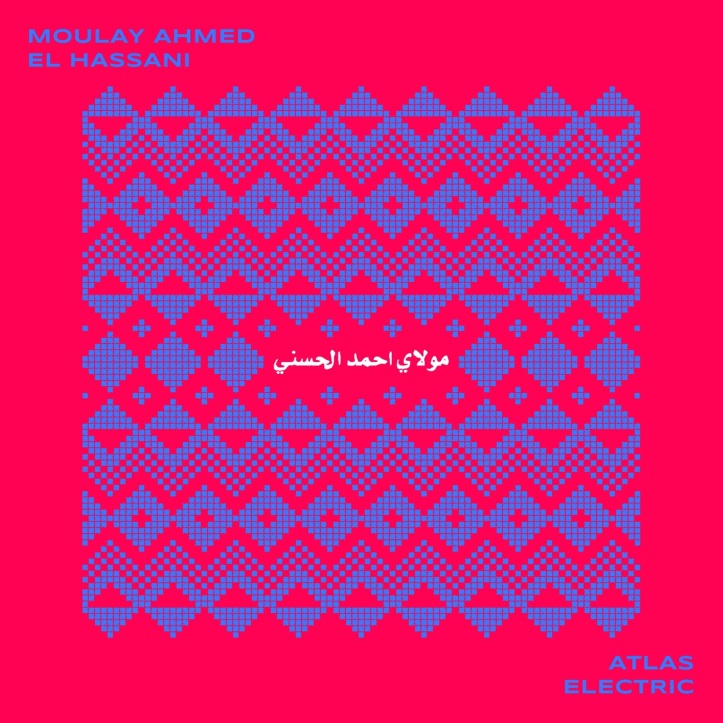 “A track is performed by Tiddukla, one of a number of groups formed by Hassan Wargui, a songwriter and banjo player originally from the Issafen region of southern Morocco. Wargui is an innovator who came to the attention of Jace Clayton (DJ/Rupture) in 2011, when he was in Morocco, working on the Beyond Digital project. Wargui uses modern technology and the Fruity Loops software to make his take on Moroccan pop/folk. His sound is rooted in the rabble rousing Berber styles of classic ’70s and ’80s crews such as Izanzaren, Archach or Izmaz. Hive Mind Records will be releasing his Tidduklah album in full when all this craziness has settled. In the meantime, check out Hassan’s YouTube channel:”
www.youtube.com/channel/UCnNudyqQ-DR0oTOeE2pSvZA
“Nev Clay lives near Newcastle and until very recently was a mental health nurse. He’s been clarting around the local music scene for 27 years, and once supported Keith Emerson out of ELP.” – nevclay.bandcamp.com

“Afro-futurist kora player Jally Kebba Susso is expanding the boundaries of Gambian musical traditions while keeping its heart and soul intact. Seamlessly combining traditional West African sounds with hard funk, jazz and rock into a new psychedelic roots sound. The piece he contributed to this compilation, Kanakumbo, is a beautiful song backed only by the wonderful sound of his kora.” – jallykebbasusso.bandcamp.com

“Paul Wilson is f.ampism – a sound/visual artist based in Brighton, UK, a member of Bolide. He also plays in Triple Heater, a duo with Ezio Piermattei. When he’s not making stuff, he’s practising/teaching Yoga.”
ampism.com
Blood Neon: “distortion, code, architecture, velocity, synthesis, cities, words, shadows” –  bloodneon.bandcamp.com
“Bad Amputee is Phil Tyler (guitar, voice), Claire Welford (bass, voice) & Robin Fry (drums). The group are from Newcastle upon Tyne. Phil has been active in the Newcastle music scene for more years than anyone cares to remember, and has found some notoriety as one half of folk duo Cath & Phil Tyler (cathandphiltyler.bandcamp.com), however, over the years he has also played in Meredith (jigsawrecords.bandcamp.com/album/pzl167-meredith-blindspot) and Spraydog (spraydog.bandcamp.com). Bad Amputee are stripped down to the bone indie/slowcore, but with great songs and beautiful vocal harmonies and you should definitely check out their stuff:”
badamputee.bandcamp.com

“Md. After Hussain & Paq is a collaboration between young Bengali singer and musician Md. After Hussain, and Italian electronic artist, Andrea Rusconi. The resulting album is the meeting of two worlds, the one of Hussain singing the folk songs he knows by heart while playing a keyboard or a pakhawaj (drum), sharing the wisdom of the Baul tradition of his homeland, and the western side brought by Andrea working on the ambient part and the arrangements of the few instruments he added.

“Bauls are a group of Bengali mystic minstrels included in the list of ‘Masterpieces of the Oral’ and ‘Intangible Heritage of Humanity’ by UNESCO. Theirs is an ancient musical tradition and a heterogeneous syncretic religious sect. While many religions are represented their membership consist mainly of Vaishnava Hindus and Sufi Muslim.

“While transcending religion the Baul compositions are very spiritual, celebrating celestial love through a declaration of love for a life mate (bosh-tomi). The Baul philosophy includes the key concept of “Deha tatta” (Truth in the body), epitomised by the aphorism “whatever is in the universe is in the receptacle (the body)”. Their quest for divinity resides in human beings and the mean to reach it is music. They seek spirituality in the music, they live for the music, wandering from village to village offering ecstatic sound waves in exchange for sustenance. After Hussain escaped from Bangladesh in 2015 and arrived in Italy in 2017 – after a long and dangerous trip through Middle East, Turkey and Libya – where he found more violence and escaped across the Mediterranean. In Italy, he found hospitality as an asylum seeker in Associazione Ardea, where Andrea is involved with Ardea Recordings a project aiming to create an archive of songs, stories and sounds by the some of the people who spent some time with the Refugee program. Hussain was invited to play freely and Andrea jumped into that mesmerising brew and provided a musical environment for that lonely singing. The resulting songs are hybrid, hypnotic, ritual poems cradled by Crumar synthetizers and Veena drones but, above all, these recordings are the journey of two people coming together in music. Hive Mind will be releasing the full album in the not too distant future.”
paqmusic.bandcamp.com

“The mysterious Syrian born, Sweden based, Khan El Rouh is a video and sound artist:”

The charities that will benefit, are:

Women’s Aid use your donations to help women escape abusive relationships, their work is particularly important during lockdown (Nev Clay):

The Ardea Association works with migrants from around the world in the city of Rimini. They run ahost of essential services for the migrant community, including the music project where Md. After Hussein and Paq were able to meet and work together (Paq):
www.unsicrimini.com/progetto-accoglienza-assistenza-integrazione-migranti-ardea-unsic-rimini-patronato-caf/

Care.org: providing emergency COVID-19 Hygeine kits to vulnerable families in 90 countries around the world, including Morocco. They will match your donation (Moulay Ahmed El Hassani):
www.care.org/emergencies/care-covid-19-response

Brighton Yoga Foundation provide yoga for mental health, for women recovering from abuse & trauma, for teenagers, yoga in schools, for the police and for NHS staff (f.ampism):
www.brightonyogafoundation.org/donate-yoga/

Brighton Unemployed Families Centre are doing amazing work in Brighton through this crisis. They continue to run socially isolated sessions at their allotment and are delivering food parcels to many vulnerable families throughout the city (Hive Mind Records):
bucfp.org